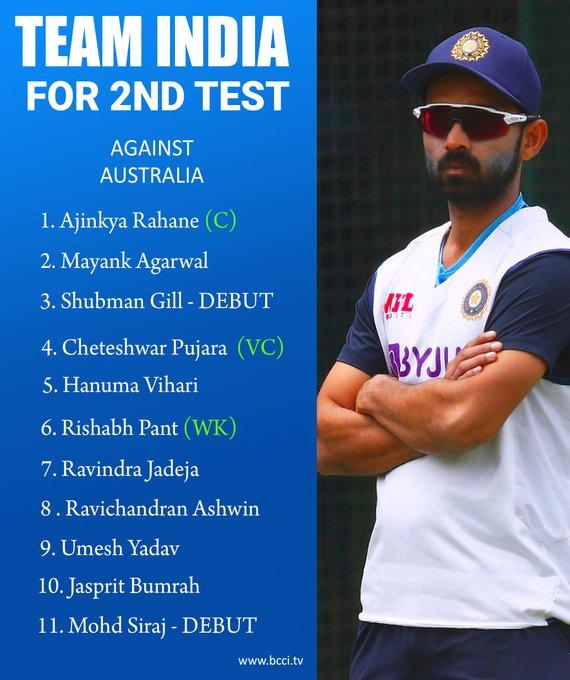 Already Australia is in the lead of 0-1 in the four-match Test series, India will take on the mighty Aussies in absence of regular skipper Virat Kohli. Ajinkya Rahane also led team will have two debutantes in form of Shubman Gill and Mohd Siraj.

While India team wicketkeeper Wriddhiman Saha has been replaced by Wicket Keeper Rishabh Pant and Ravindra Jadeja is also making a comeback to the Test side.

ALERT🚨: #TeamIndia for 2nd Test of the Border-Gavaskar Trophy against Australia to be played in MCG from tomorrow announced. #AUSvIND pic.twitter.com/4g1q3DJmm7

Opener Prithvi Shaw’s fail to impress axing was on cards after he was bowled out for scores of 0 and 4 in two innings of the opening Test at Adelaide. Indian Team Star opener batsman Shubman Gill’s languid approach and that extra second while facing fast bowlers, coupled with a way tighter technique than Prithvi Shaw, might just give the dressing room the satisfaction required in testing times.

Shubham Gill will have the company of Mayank Agarwal, who would be wanting to do an encore, if not better, of his performance at a venue where he made his Test debut.

Similarly, Indian Wicket Keeper Rishabh Pant, whose intent always provides way more assurance than a passive Wriddhiman Saha, is expected to play his fearless brand of cricket which is the need of the hour. Rishab Pant was an instant hit during the last tour in 2018-19 but in the past year, had lost both form and confidence to surrender his place in the white-ball formats.

Young Bowler Mohammed Siraj will step in short-term to fill the void created by crafty Indian Start Bowler Mohammed Shami’s injury and it will be about how Rahane, touted as a bowler’s captain, handles him.