Know about the Rajdhani Express 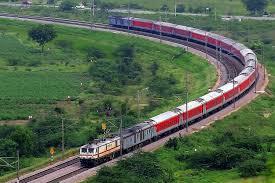 If Indian trains were considered as classroom students, then the Rajdhani Express would be among the toppers. The word ‘Rajdhani’ means ‘The Capital’ in various Indian languages, which justify the connection of Rajdhani trains to New Delhi. Rajdhani trains are a series of express trains that connect the capital to many capital cities of different states all over the country. If a passenger flips through the train details they will find that Rajdhani Express trains are among the fastest trains in India, ranking among the Shatabdi Express, Gatimaan Express, Tejas Express, and the Duronto Express.

● The facilitation of fast transport to give impetus to the trade of capital cities of other states with New Delhi became an urgent issue. Thus, Rajdhani Express was introduced in 1969, as they could run as fast as 140 km/hr or 87 mph. This speed variation was dependent on particular track sections.

● The very first Rajdhani train departed from New Delhi station and traveled to Howrah station and covered a distance of 1,445 km in 17 hours and 20 minutes.

● These trains are bestowed with the highest priority in the Indian Railway network.

● The trains are well equipped with many luxurious facilities for passengers. These trains have to air-condition in all the coaches. Depending upon the journey timings, passengers are served breakfast, lunch, high tea, and dinner.

● The trains halt only at prominent stations and they have fewer stops than other trains.

● Dynamic pricing has been introduced in Rajdhani trains. Dynamic pricing includes surge pricing, demand pricing, and time-based pricing, which is implemented as a business strategy to set flexible prices for ticket fares and other inclusive costs. For example, the train ticket fare does not account catering costs if the passenger opts for a ‘no food’ option, as opposed to earlier when catering costs were mandatory.

Incidents that had occurred

● A tragic incident occurred on 25th June 2014 when a New Delhi-Dibrugarh based Rajdhani Express derailed at Goldin Ganj station near Chapra. The incident was a suspected sabotage by Maoists, as at least 4 people were killed, and 8 people were grievously injured. The train was heading on a journey towards Dibrugarh.

● Another incident occurred on the morning of 14th September 2017 at 6.00am. A New Delhi-Ranchi bound Rajdhani Express coach was completely derailed at New Delhi station. A railway spokesperson confirmed the safety of everyone boarded on that train.