A Confused Ruler - a Chaotic State 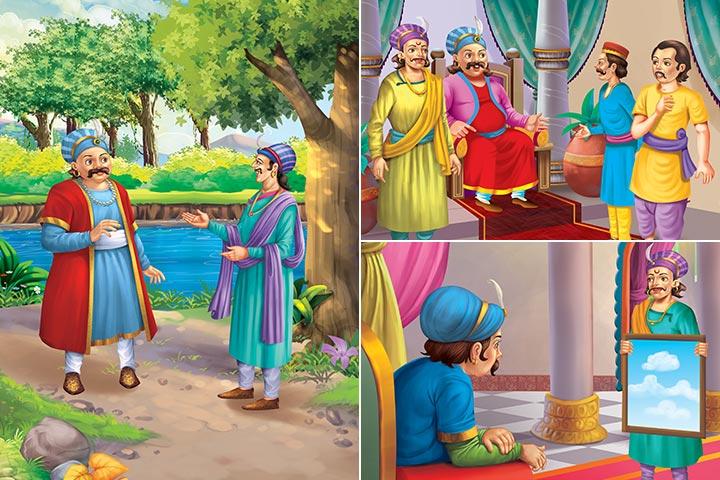 This is the time when every word the king said was justice.There was a state which was famous for stupidity as well as retarded intelligence. Because of this, his own ministers along with the subjects trembled before him. Don't know when a minister makes a mistake and the king hangs him.

One day the court was going on that the Murali salt shopkeeper arrived there shouting and crying. When the king saw him so unhappy, he asked, "What happened, who are so sorry." "Then Murali recounted to you" Maharaj, last evening my wife ate food and slept. She was dead when she saw this morning. "The king asked, "So what have you come to us?"

Murali pleaded with folded hands "Maharaj, last night he had eaten cereal bread and I had eaten only rice. This means that the grain was poisonous due to which my wife died. I want justice. ""Where did you buy the grain from?" When asked, Murali said, "I bought the dough from Gangu shop."

The king immediately asked the soldiers to capture Gangu. When Gangu was introduced in the court, he said "Maharaj, I only grind grains and sell flour, I take grains from Ramu farmer."

Now the king ran the soldiers to capture Ramu Kisan. When Ramu Kisan, surrounded by soldiers, entered the nervous court, he started crying bitterly, "Government, there is no fault in me. I grow grains from the same seed that only the name seed merchant sells to me. "

The king's anger was increasing. He immediately asked only the seed merchant to appear. Only when the seed merchant was taken captive, when he stood in front of the king in the court, he begged and said, "Hujur, I am sorry, I sell the same seed to these farmers that I get from the state treasury." It is not my fault.

Hearing this, the anger of the king started touching the seventh sky. What is happening after all? Murali's wife has passed away and I have not yet been convicted to hold the convict. What will the subjects think about me?

The king immediately announced to hold the state food minister. What the announcement was to do, the State Food Minister was already present in the court. Immediately arose and presented himself to the king. The king was asked if the seeds were sold from his ministry. So the food minister accepted.

What was it then, the king of crime had found it. Now it will not be appropriate to delay so he hurriedly sentenced the State Food Minister to death. The food minister started shivering with fear and all the ministers present in the court began to cry. Soldiers familiar with the king's adamant decisions also started preparing for the execution. He knew that he would be hanged.

After all, when the Food Minister was put on the gallows to hang him, he broke down. The food minister was a good deal-man, his weight was so small that the wooden planks could not handle his weight.

When two or three planks were broken, the soldiers came running to the king and said, "Hazur, the weight of the food minister is so much that it breaks as soon as it is on the gallows." It will take two to three days to make thick wooden planks. You tell me how to hang them. "

Hearing this, the king proclaimed "Justice is done." The hanging will take place today. If the food minister is heavy, then hang any thin minister. "And the soldiers hanged whatever thin minister they saw in front. The king is a symbol of justice and progress. But the state whose king is such a fool is foolish to imagine Mars in that state.