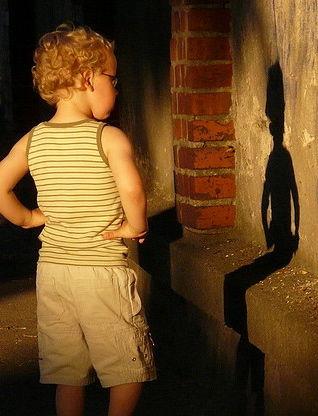 In this day and age, most people never had to encounter an imaginary friend, as most of us, when we were kids, we're already busy with our Nintendos, PlayStations and other gimmicky gadgets to even spend time with said imaginary friends. However, many children still have imaginary friends, and some people even have their's revisit them later in adulthood.

However, are these so-called friends really just a figment of our imagination? Could they be supernatural beings in disguise? From ghosts of those who haven't moved on to something demonic that came out of a horror movie. Here's a collection of spine-chilling stories from people about their friends that may or may not be made up.

A mother and a 4-year-old daughter moved into a house that was built in the 1800s. The daughter told her mom out of the blue that she was playing with another girl named Jenny, the mother didn't overthink of what the daughter said because having imaginary friends was probably just a "phase."

The next morning when the daughter woke up, her back and legs were full of deep scratches.

The mother decided to research the history of the house and found a family picture where she then asked the daughter to point to anyone she knew, and without missing a beat, she pointed directly at Jenny, who was said to go to the basement and never be found again.

A homicide detective was working on a murder case of a boy. Early into the investigation, they still haven't found the body, but the mother crumbled apart and had confessed that she was the one who killed her son and had hidden the body under their trailer. So the investigation continued, and the trailer was searched. However, a different family was residing there.

The new family there had mentioned that their son had an imaginary friend that was living under trailer but would come out from time to time to play with the kid. So they went to check under the trailer, and they found the body of the dead boy directly underneath the little boy's room.

When she was still a baby, her sister Julia already had an imaginary friend called Jessica. Julia said that whenever Jessica got upset, her eyes turn a deep shade of green, and her voice would drop deeper than it normally is. Things were good for a while. However, it took a turn for the worst, and their parents started to think that they were living in a haunted house

One night when the mother was putting the girl to bed, she started crying and pointing towards the corner. This kept happening until Julia walked into the room, shouting, "Stop it, Jessica!" and the crying stop right away. Julia said that Jessica liked to put on scary masks to terrify people, so of course, the mom was freaked out and told Jessica to ‘play nice’

As time went on, Julia grew apart from her imaginary friend and stopped talking to and about her. A couple of years later, their little sister Abbey started talking, and just like Julia, Abbey began having an imaginary friend as well with the same description of the green shade of eyes and deep voice when upset, and "coincidentally," they were both named Jessica.

At the age of three, the son kept telling his mom about the creeper man who was residing in the room of the grandparent's bedroom. The son keeps bringing it up after each visit. The only thing the mother regrets asking was what this creeper man looked like. The son without missing a beat replied casually 'Oh, He doesn't have a face.'

Since we can't control who and what kids are exposed to, they seem to always come up with these kinds of imaginary friends to fill in voids or to always have someone with them. So it's difficult sometimes to discern whether these imaginary friends are good or evil, real or not. Still not enough? You can also click here to check out some other supernatural stuffs.