With the JEE Main Exam just a month away, Know JEE Main Cut Off and JEE Main Rank 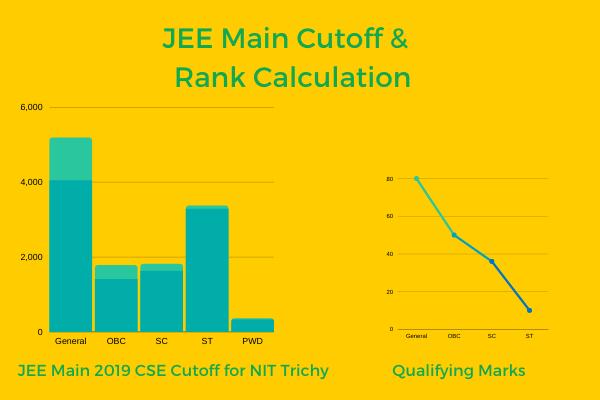 According to reports, due to the absence of admissions to foreign colleges because of the worsening COVID situation, more Indian students will be applying to home-based Universities and Colleges this year and maybe even the next year too. This will definitely increase the competition among the students. Thus, it may also increase the JEE Main cut off and other competitive exam’s cutoffs in India. The cut off for JEE Main 2020 April exam will only be released after the Exam and announcement of result by the National Testing Agency (NTA). The result for the January 2020 session has been announced where 9,21,261 candidates registered for the B.E/B. Tech paper, out of which 8,69,010 appeared.

Types of JEE Main Cut Off

The JEE Main admission cut off, is qualifying marks for admitting in particular institutions. It will be announced by JoSAA (Joint Seat Allocation Authority) in the form of opening and closing ranks for each IITs and NITs on the priority basis of the aspirants appearing in counseling.

Candidates must secure the minimum marks (closing marks) as per the requirement of institutions, which will be announced by JoSAA after each round of counseling. Top 2,50,000 JEE Main 2020 qualifiers will be eligible to appear for JEE advanced 2020.

Expected JEE Main Cut Off for the January session exam, 2020

The actual JEE Main cut off is not announced by the exam conducting authority NTA until the release of the result of both the sessions of the exam. So the expected cut off for Paper 1 is:

This cutoff may increase as more and more students will be applying for admission to top colleges in India.

JEE Main Cut Off Trend Over The Last Few Years

Previous year trends analysis gives a fair idea about the score. Fluctuations can be observed on the basis of difficulty level. Candidates can check the last year's cut off trend.

Calculation of JEE Main 2020 rank based on NTA Percentile score

In the January session, 8,69,010 numbers of students appeared. So, the formula of the rank calculation is-

Admission in IITs on the basis of the JEE Main Score

Admission in IITs does not give any priority to the score. You have to clear JEE Advanced for admission to the IITs. JEE Main rank is important for appearing in JEE Advanced.

Admission of NITs on the basis of JEE Main score

Admission of B.Tech into NITs is made only through JEE Main conducted by NTA. There are a few steps in the admission process. Those are-

So, as long as the exams are not complete the actual JEE Main cut off will not be available. The above representations are based on previous years' trends. The facts and figures mentioned here must be able to give you some idea about the minimum cut off required for admission to various colleges. But with the exams being postponed there is any uncertainty in the minds of aspirants. The only thing to be done now is to balance your study along with some relaxation which will help you to get some breather and keep you fresh before the exam in September.