What Is Coagulation Test And How It Is Done? 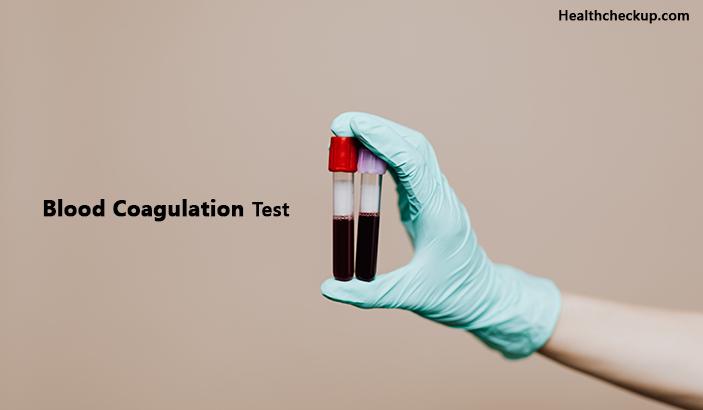 Blood clotting is more than a serious condition which many people are aware of. Clotting disables free movement of blood which may force it to travel to the brain, lungs, and heart leading to hazardous health complications and death at some times. To know if your blood is prone to clot blood coagulation test is the only way.

Let us see how it is done and what percentage is the normal value and other effects of a blood clot.

What Is A Coagulation Test?

A coagulation test measures blood’s capability to clot and if it clots how long it does take to clot. This test helps the doctor to assess the risk of developing clots (thrombosis) or excessive bleeding in blood vessels.

These tests are identical to many other blood tests and the risks and side effects are least. A lab technician will collect the blood sample which will be sent to a laboratory for further testing and examination.

Why Is The Coagulation Test Done?

As said above clotting disorders may lead to an unsafe amount of clotting or bleeding which is not good for a person’s health. If a doctor suspects a clotting disorder, he/she may prescribe 1 or more coagulation tests that aim at measuring different proteins and their functions.

These tests are also useful to know the different diseases that can lead to clot besides knowing which medicines can affect the ability of clotting. They are also done before a few surgeries.

Coagulation tests are many and below are the types;

Complete blood count (CBC) is part of routine physical examination and the results can say many underlying complications such as anemia or a low platelet count.

It is a protein that the liver makes and in this test fibrinogen level in the blood is counted. Abnormality could be a symptom of hemorrhage or excessive bleeding, fibrinolysis, or placental abruption. It is also called the factor I and hypofibrinogenemia test.

Prothrombin is also a protein produced by the liver. The test is made to know how long and how well the blood clots and the test usually takes roughly 25-30 seconds. It is even useful in tracking medicines that influence clotting.

Usually, this test is done along with an activated partial thromboplastin time (aPTT) test.

Platelets help the blood to clot and a platelet count blood test is done to know the blood platelets count.

It measures the working condition of fibrinogen.

It analyzes how soon small blood vessels in the skin close and stop bleeding. It is done differently in comparison to other blood tests.

How Is The Coagulation Test Done?

These tests are done the same as many other blood tests. The only precaution to be taken before the test is not taking a few medicines said by the doctor. Before the test, either inside part of the elbow or back of the hand is sterilized and a needle is injected into the vein to draw blood. There are usually no serious side effects save for pain and bruises.

Blood tests results from the laboratory are sent to the doctor and the values can differ from one laboratory to the other. So, better ask the doctor to get a clear finding of the result. Based on the test report, the doctor suggests treatment.

Usually, a prothrombin time test known as a PT or pro time test is the test to know clotting normal values which are expressed in two ways

Usually, 10 to 14 seconds is the average time needed for the blood to clot, and a figure more than this indicates blood is taking a longer time than normal to clot and if the time is lower it means blood is clotting quickly than usual.

What Is INR Blood Test

INR blood test allows for an easier comparison from multiple labs. In normal people, an INR of 1.1 or lower is taken as normal.

Usually, any blood coagulation test is done with a specific purpose in mind and only on the advice of a physician to further diagnose any underlying complications. Also, remember you’re not the correct person to analyze these reports unless qualified.

How Can Construction Industry Prepare For Post Corona Times

Benefits Of Massage Therapy For Hypertension And High Blood Pressure

How a smartphones are destrying our children and generation?