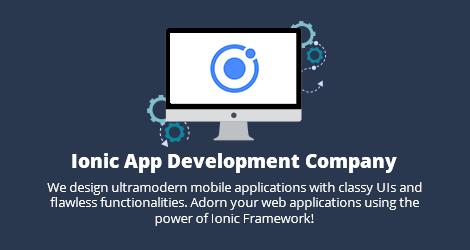 If you are a developer and are into Ionic Mobile App Development, you must be aware of the Ionic 4 framework. Experts have rebuilt it using standard web APIs and every component comes with a web component. These components are a part of an open source tool named ‘Stencil’. It is a web component compiler which the developers use for crafting reusable UI elements and fast web applications.

Web components are nothing but a set of web platform application that enables users to create customized and reusable HTML tags that you can use for web pages and app development. Putting it in different words, their functionality remains separated from the other code and the developer can make use of the web page.

With the help of web components, it is possible for the user to create everything they can through HTML, CSS, and JavaScript. Also, they can make a portable element which they can use in the future. For most of the web components, the end purpose is to enable the developers to use the code again.

Specifications That Apply to Web Components

Why Make Use of Ionic 4 for Mobile App Development?

If you are a part of any Mobile App Development Company, you can think about using Ionic 4. This is because it has better upgrades as compared to Ionic 3. Also, it works quite well for clients. And that’s why several developers choose it to build apps based on Ionic. Currently, there are more than 5 million apps built on Ionic. This number is twice the number of apps that are a part of the Apple App Store.

Ionic 4 is one of the best frameworks when it comes to developing apps. With Ionic & Capacitor bringing changes to the framework, it is sure to spearhead the hybrid movement for a better future. Being a Mobile App Development Company, Biztech Consultancy has developed Ionic Application with codes that are clean and compatible with Ionic guidelines. Why not have a tête-à-tête with us and discuss your next mobile app development idea?!