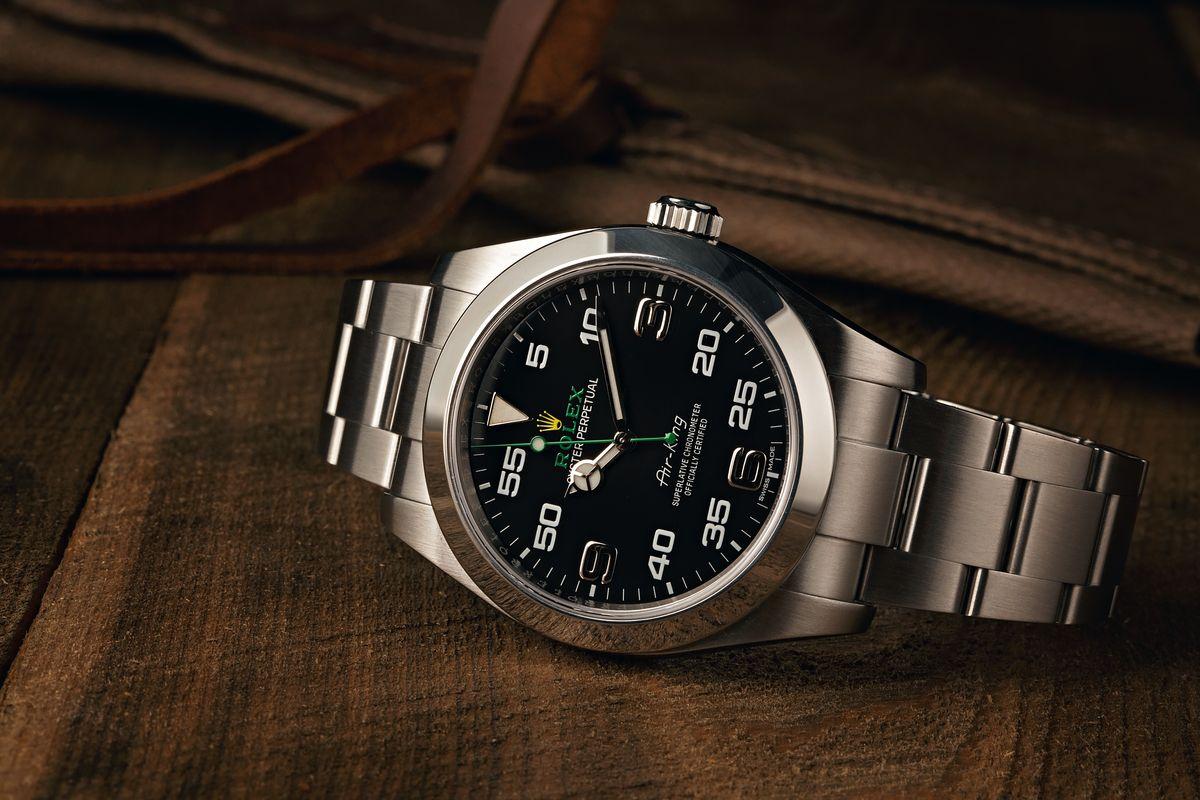 The Rolex Air-King is one of the oldest collections in the brand’s catalogue that dates back to the 1940s. Rolex designed the watch technically as a pilot’s watch. But thanks to its classic design and accessibility, the Air-King has also been highly desirable among entry-level Rolex watch collectors.

However, the elite Swiss watchmaker has made several significant innovations and improvements to this sophisticated line. Even the brand ceased its production after almost seven years only to alter the Air-King’s design, thereby turning it to be a tool watch.

Continue reading to delve into the fascinating history of the popular and coveted Rolex Air-King.

Rolex introduced the Air-King in 1945 as a mainstay collection of the brand, paying tribute to the pilots of the Battle of Britain. So the original collection included the Air-Tiger, Air-Lion, Air-Giant and the Air-King. However, the interesting fact is that among these Air-themed timepieces, Rolex continues to produce only the Air-King model to date.

Eventually, the earlier references that carry the name “Air-King” like the Reference 4499, Reference 6652 and Reference 4925 are virtually rare and thus, more coveted today. However, one significant point to note is that all of these versions flaunted the name “Air-King” on their dials. Rolex often refers to them as merely classic Oyster Perpetual timepieces.

Well, the best way to explore the complete history of the Air-King is going through its references. Thus, here are the five most significant models of the Air-King.

If you look back at the early years of this watch’s history, you will come across the Reference 5500 that was the fourth generation of Air-King. But the watchmaker perceives this reference as the official commencement of the Air-King collection. Interestingly, Rolex produced this watch for many years, bestowing a lasting and severe impact.

For instance, even if you are a Rolex enthusiast and think of the Air-king, the Reference 5500 is perhaps the one to first strike to your mind. The Air-King Reference 5500 features a 34mm case diameter and simple dial design with standard stick hands.

Overall, the Reference 5500 flaunted an incredibly minimalistic design. The watch did not even exhibit the brand’s symbolic date window at the 3 o’clock side. Over the years, Rolex has not changed the classic aesthetics of the Air-King to a greater extent.

The Rolex Air-King Reference 5500 is indeed the least expensive Air-King model. Also, it is also one of the most inexpensive vintage Rolexes.

The beloved Air-King Reference 5500 was replaced by the Reference 14000. This new watch retained the same stainless steel case of 34mm and the simple styling. However, what difference Rolex brought this time is unleashing some new dial colour options for the new reference.

You will find the Air-King Reference 14000 in white, blue, black and salmon dial colours. Furthermore, the watch was available in two bezel options – engine-turned or smooth bezel. Rolex also upgraded the model by offering a sapphire crystal and a brand new calibre 3000 movement.

However, the movement has a frequency of 28,800vph. Another important fact is that this movement was not COSC-certified. Later, the watchmaker upgraded this reference and introduced the Reference 14000M, featuring the Calibre 3130.

In 2007, Rolex unveiled the Reference 114200 with bolder and modern features. The watch flaunted the same 34mm case diameter. However, the brand offered the case wider lugs, making it feel more prominent on the wrist. Rolex also introduced this reference with a wider collection of dial colours.

The Rolex Air-King Reference 114200 also had an option of 18ct white gold fluted bezel for the first time. The brand also equipped the watch with new 904L Oyster bracelet and solid links. However, the Reference 114200 was powered by the Calibre 3130.

But the significant difference this time was that the movement received the COSC certification. While the Air-King Reference 114200 enjoyed a shorter production run, it is a famous collector’s watch.

Rolex discontinued the production of Air-King in 2014. However, the brand modified and re-launched it as the Reference 116900 in 2016. This new Air-King features a 40mm case size and is powered by the Calibre 3131 movement.

However, this Air-King watch shares similarities in structure as the Rolex Milgauss. The new watch sports a unique black dial with vibrant yellow and green accents. What makes it historically more significant is that the Reference 116900 is the only watch from Rolex that feature the “Crown” logo and the text “Rolex” stamped in two different colours.

How Yoga Nidra can help you sleep better - Benefits &Poses!

5 Alternative Engagement Ring Stones You Should Choose & 3 You Shou...