Tesla Stock Rides High Despite the Effects of Coronavirus 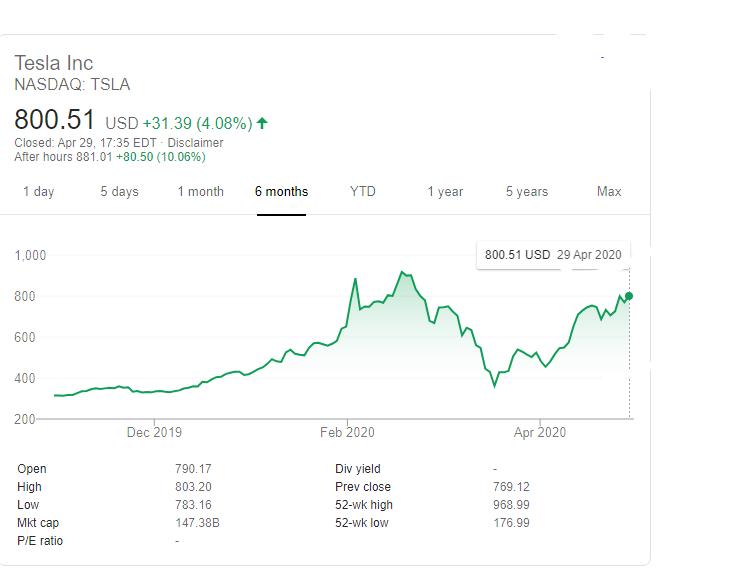 The electric-vehicle pioneer Tesla has asked dozens of employees to return to work on Wednesday. This was just in time for a first-quarter release which probably undermines optimism as to whether the EV manufacturer can re-establish the direction of a sale that underpinned a historic uptrend into February’s all-time high.

Elon Musk revealed his skepticism about the outbreak when a two-week shutdown at the company’s Shanghai factory became a potential threat to first-quarter results. China is springing back after weeks of lockdown.

The production supply line is now back in business, while demand is still doubtful. Nevertheless, financial losses all over the world have had a devastating effect on international revenues in the coming quarters.

As Tesla and CEO Elon Musk have nor offered any guidance on the pandemic’s impact, there no way to get an accurate estimate of sales or cash flow for this quarter. Nearly every auto manufacturer from around the globe has warned about long-term headwinds, except Tesla.

Although most of the analysts are skeptical about Tesla, the stock maintains its’ incredible popularity. Still, shares are up around 85 percent year to date, smashing comparable double-digit losses in the S&P 500 and Dow Jones Industrial Averages.

Tesla Wants to Get Back to Work

Tesla suspended auto production on March 19. It’s important to mention that there was no report from Tesla about the effects of COVID-19 since the company shut down. Investors want to know how Model Y production and sales have been affected by factory closure and what is Chief Executive Elon Musk’s expectation of how the rest of the year will play out.

Due to the company’s factory shutdown and other disruptions, market experts have lowered forecasts on vehicle shipments from 500,000 to 420,000 this year.

Tesla’s Futures increased by more than 10%, adding to gains from the last week. The electric auto manufacturer is expected to sustain its upward trend in deliveries. It’s taking out all the stops to try to maintain production rates as steady as possible even against the pressures associated with coronavirus.

According to the reports, the company is looking to bring some of its workers back to their vehicle assembly facility in Fremont, California.

Let’s see what the numbers are saying.

To compare to General Motors Co. and Ford Motor Co., which have dropped by 41% and 46% this year, Tesla has reached hefty gains.

What Analysts Are Saying

Tesla stock is currently a buy. On Monday, the stock increased by 10.2%, closing near 798.75. It reached out above a new buy point at 775.05, with the buy range rising to 813.80. Tesla futures were added to the Leaderboard watchlist last week.

According to Tesla predictions, the company will hit $100 billion market-cap milestones within the next two months.

As analysts estimate, options markets imply the stock will move between 10% and 15% in response to the earnings report. In the past four earnings reports, the stock has increased more than 10%, on average.