Smart thermostat at smart home - how it works? 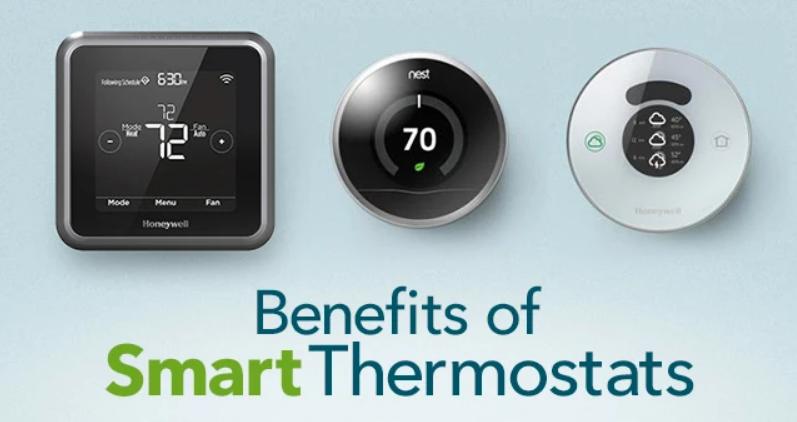 The Internet of Things, or IoT, refers to the billions of devices all around the globe that are connected to the Internet, all collecting and exchanging data. Thanks to the creation of cheap microchips and the wireless networks, you can turn everything from something small, like a tablet, to something as big as a train or such, into part of IoT. Interconnecting all those various devices and objects, adding different sensory systems, allowing to do a real time data exchange and all that without any interference from human beings. Thus IoT makes literally everything around us smarter and more responsive, combining digital and physical worlds into one.

Actually, Internet of Things was developed, at least partially, to make creation of “smart home” systems possible. IoT possibilities are not only allowed to create industrial or any other business intelligent and self-sufficient ecosystems, but also made all included components and devices cheaper thus allowing to use them at home.

What actually a smart home is?

But there is no standard definition of what Smart Home means. In simple terms, a smart home is a general term for a residential environment in which important elements, such as lighting, radiators and household appliances, are networked and controlled through a terminal device like a smartphone. And one of the first devices that’s a starter for almost anyone creating a smart home is a thermostat.

What is a smart thermostat and how it works?

Without explaining the basics of what thermostat is, a smart one version of it is much more customizable and is controllable via smartphone. Its intellectual heat-control system will learn over time using your own settings as a basis and later becoming a fully automated device. Thus it will not only save you some time, taking thermal controls on itself, but it also will help you saving money. It’ll be lowering temp when no one's at home and rising it right before someone comes back. If you want to buy yourself one, than you can get more information all over the internet to pick one which’ll suit your needs best.

First line of devices for smart thermostat to interact with, excluding the hub device, is sensory system. Most of those devices are using an array of sensors to monitor both overall temperature and the temperature in each individual room. It's very useful to have a set of sensors which’ll help thermostat in keeping your place warm when needed and without leaving any of rooms cold.

Another useful device that came from Internet of Things to smart home thermostats is a geofencing system. This makes a location-aware device from any smart thermostat and allowing it to lower the temperature when there is no one home and raise it when someone has returned. It’ll help a lot during colder seasons so your home will be kept warm and you won't spend a lot of energy for creating a comfortable conditions when there is no one in.

And one of the last smart devices that are integrated into smart home systems and combined with thermostat is, of course, radiators and air conditioning systems. Without those things thermostat, even a smart one, also wouldn’t work though not being able to regulate the temperature. Obviously, those devices, combined with a thermostat, sensors and geofencing, will create your own home ecosystem with the microclimate that’s needed. Especially if you add a humidifier/dehumidifier system to the combination.

How thermostat is controlled?

First of all, during the first days or even weeks, you will control your smart thermostat manually, thus allowing this device to collect data and adjust to your schedule. Of course, later you will be in need of finding a comfortable temperature and adjusting a schedule to a different season, but that’ll be easier. And then thermostat will do everything automatically, especially when it’s connected to sensors and geofencing.

And if we’re talking about a control methods, there are at least 3 of them, depending on a model. First, and the most common, is manual control via thermostat itself, like with a simple classic thermostat. Second, and the one that makes thermostat smart, is a remote control via mobile phone or tablet. And third method, the most advanced one, is voice control, and with this feature active you’ll just need to tell your thermostat about the needed conditions

How Can Construction Industry Prepare For Post Corona Times

Benefits Of Massage Therapy For Hypertension And High Blood Pressure

How a smartphones are destrying our children and generation?

Interesting Ways to Personalize Your Bathroom