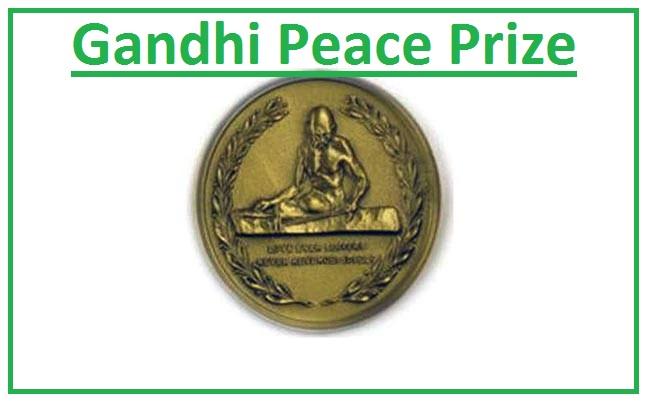 Gandhi Peace Prize is also known as The International Gandhi Peace Prize. It is named after the Father of Nation of India i.e. Mahatma Gandhi and this peace prize is given annually by the Government of India.

Gandhi Peace Prize established in 1995 at that time the P.M. of India was P. V. Narasimha Rao and the President of India was Shankar Dayal Sharma.

This award was launched on the occasion of the 125th birth anniversary of Mahatma Gandhi.

The award is given to individuals or institutions for their contribution to social, economic, and political change through non-violence and other Gandhi Ji methods.

The award prize is 1 Crore rupees (10 million) in cash.

Awarded for Contributions in social, economic, and political change through non-violence and other Gandhian methods.

Some Important Recipients of the International Gandhi Peace Prize.

First Winners of this award

Julius Nyerere (First recipient) from Tanzania, in 1995. Julius Kambarage Nyerere was a Tanzanian politician who served as the leader of Tanzania, and previously Tanganyika, from 1960 until his retirement in 1985.

Gerhard Fischer (Third recipient) from Germany, in 1997 German diplomat, recognized for his work against leprosy and polio.

Ramakrishna Mission (First Indian Organization to receive this award), from India, in 1998

Baba Amte from India, in 1999 Social worker, known particularly for his work for the rehabilitation and empowerment of poor people suffering from leprosy.

Grameen Bank from Bangladesh, in 2000 Founded by Muhammad Yunus.

John Hume from the United Kingdom, in 2001 Northern Irish Politician

Coretta Scott King from the United States in 2004. Activist and civil rights leader.

Chandi Prasad Bhatt from India in 2013. He was Environmentalist, social activist, and pioneer of the Chipko movement. Founded Dasholi Gram Swarajya Sangh (DGSS)

ISRO from India in 2014. Space agency of the Indian Govt.

For his contribution to Leprosy Eradication in India and across the world.

It is a social service organization that works to promote human rights, environmental sanitation, non-conventional sources of energy, waste management, and social reforms through education.

For Rural Development and Education sector